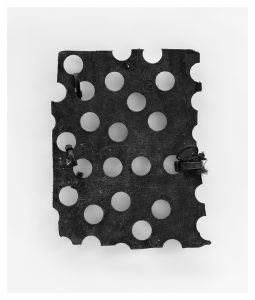 In January 2015, Mike Perry was awarded the Coastal Currents Artist In Residence at Oriel y Parc, St Davids, Pembrokeshire, Wales. In partnership with National Museum Wales, the residency runs from January to April 2015 and will include a series of public events and interactions starting with a community ‘beach clean’ over the weekend of Saturday 31st January and Sunday 1st February. Perry will then photograph selected plastic objects collected from Pembrokeshire beaches and exhibit the work at Oriel y Parc on the 10th March to 17th April. The process is documented in a short film directed by Eilir Pierce, also released on 10th March 2015.

Marine litter from around the Pembrokeshire Coast has been photographed in forensic detail to challenge traditional ideas of what is ‘natural’, for an exhibition at Oriel y Parc Gallery and Visitor Centre in St Davids.

The exhibition will also draw connections with the current exhibition Natural Images – Historic Photography Uncovered, which is on display in the main gallery at Oriel y Parc.

Mike said “My work is part reflection on global consumption and the way we treat the planet but also a story of the strange new forms emerging from nature’s reshaping of the man-made.”

Pembrokeshire Coast National Park Authority Arts Development Officer Kate Wood, said “We are thrilled to have been able to work with an artist of Mike Perry’s stature and I’d like to acknowledge the support of The Arts Council of Wales, without which this project would not have been possible.”

The plastic was collected at the end of January during a series of beach cleans with the help of Keep Wales Tidy and members of the public.

Mike selected plastic objects ranging from old flip-flops to buckets covered in barnacles, and photographed them with an extremely high powered camera allowing him to capture the fine detail and decay caused by years in the sea.

Bryony Dawkes, Amgueddfa Cymru-National Museum Wales Partnership Projects Curator, added “We are delighted to have Mike as artist in residence at Oriel y Parc. His forensic and compelling take on the coastal landscape of today makes fascinating contrast with the historic depictions of Pembrokeshire currently on show in Natural Images.”

“I hope visitors will enjoy the differing and thought-provoking interpretations of landscape on display throughout Oriel during Mike’s residency.”

Mike has already exhibited work from his Môr Plastig series at the National Eisteddfod and the Royal Academy of Arts and new works created during his residency have been selected for display at the Venice Biennale 2015.

A short film about the residency, directed by Eilir Pierce, will also be launched at Oriel y Parc on 10th March.